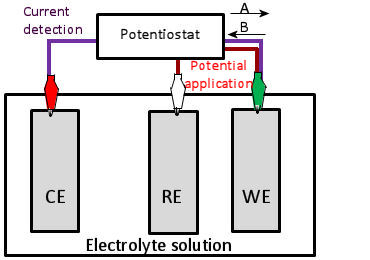 Fig. 3.1 Shows the applied potential variation as a function of the time, and it sweeps at a scan rate of 100 mV/s in the negative direction (reduction direction), from 0.6 V to -0.1 V vs Ag/AgCl reference electrode. The result is shown in the cyclic voltammogram (Fig. 3-2). The current, which was about 0 A at the start of the measurement, starts to flow in the first segment of sweeping the potential in the negative direction, and the current for the reduction (the sign is minus in this figure) flows out, reaching the reduction peak at 0.229 V. The current observed at this time is called the reduction peak current. After that, the potential sweep direction is turned back at -0.1 V, and oxidation of ferrocyanide ion starts at around 0.1 V, and an oxidation peak is observed at 0.289 V. The difference between the oxidation peak potential and the reduction peak potential is called the peak potential difference, and the value is close to 0.059/n V (59/n mV) at 25°C. Note that n is the number electrons transferred. However, this equation can only be applied in case of fast electrons transfer. 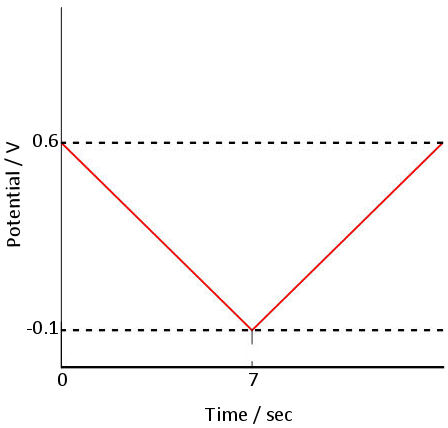 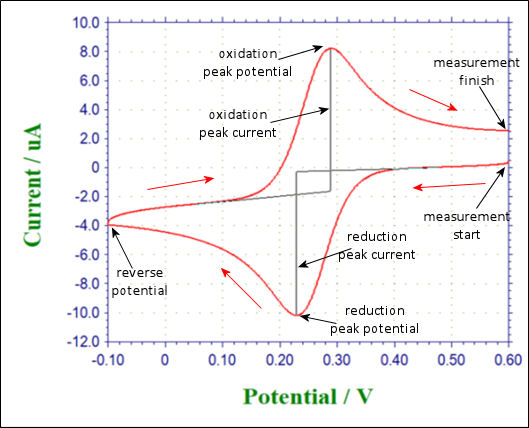 The faradaic current at the peak value is referred to as the peak current, and it is known that the following equation can be adapted to the peak current of reversible reactions with fast electrons transfer. (Randles - Sevcik equation).

At 25°C, this equation summarizes the constants and is expressed as follows.

The peak current is proportional to the concentration c of the redox substance and the square root of the scan rate v.
Fig. 4-1 shows the result of cyclic voltammetry of 2 mmol/L potassium ferricyanide solution at scan rates of 0.01, 0.04, and 0.09 V/s. Fig. 4-2 plots the relationship between the square root of the scan rate and the reduction peak current, and it can be seen that there is a linear relationship. Also parameters such as the diffusion rate D can be get by drawing an approximate line for this plot and using its slope. 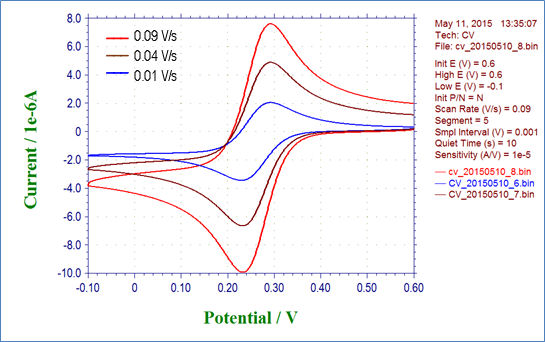 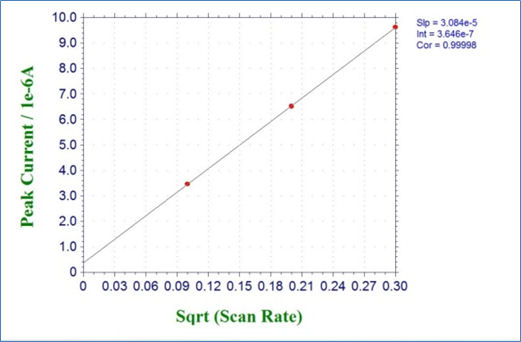 Fig. 4-2 Plots of reduction peak current versus square root of the scan rate.

In cyclic voltammetry, besides of the Faraday current caused by the redox reaction, the charging current, the current flows due to charge and discharge in the electric double layer formed at the electrode interface. This is generally corrected by subtracting the measured (background) cyclic voltammetry of the electrolyte containing no redox substance. 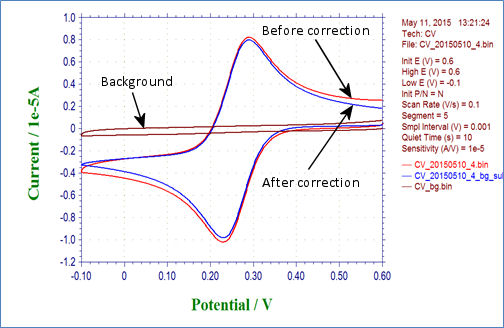 An electrochemical reaction with a slow electron transfer rate at the electrode interface is called as a non-reversible reaction. This is due to the reaction rate constant k0 (n is the number of electrons transferred). 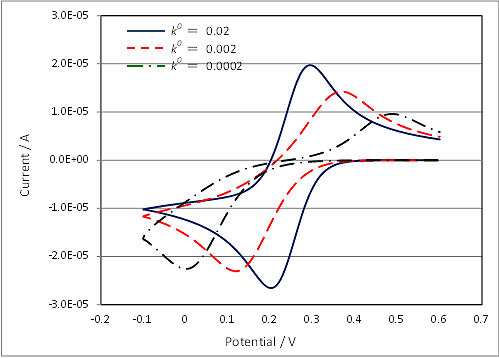 As described above, the criteria for classification of reversible and non-reversible reactions using reaction rate constants depend on the number of electrons tranferred (n) and the square root of the scan rate (v), respectively. Thus, for example, in the case of one-electron reaction of k0 = 0.05 cm/s, it is quasi-reversible at v = 0.1 V/s, but reversible at v = 0.01 V/s. Thus, even if the sample to be measured is the same, in some cases it become possible to analyze as a reversible reaction by reducing the scan rate of cyclic voltammetry.